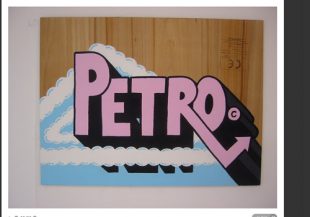 Ultra-elusive graffiti legend Petro is presenting a rare gallery exhibition, ‘A Show of Paintings and Drawings’ at the Rag Factory in Shoreditch next month. Running for three days only from July 24 to 26, the show will offer the chance to take in a diverse range of the London-based artist’s work.

Petro has built a formidable reputation among graffiti heads across the globe, in a career that has spanned over twenty-five years. Serving his apprenticeship on the streets of Kent, Petro later moved to London where he continued to immerse himself in the traditional ethos of graffiti art.

Renowned for shunning media attention, Petro is surprisingly affable and personable. His eyes light up as he talks about his recent travels to Berlin. “If we were in Berlin now this whole place would be destroyed” he says with a grin. “It’s fucked: tagging, throw-ups, mess, vandalism – good old fashioned vandalism.”

Petro lives and breathes graffiti, yet, despite his prolificacy, trying to find images of his work outside the street environment is a thankless task – there is a handful at most. Agreeing to only his second ever interview, Petro talks candidly about his graffiti art roots, his forthcoming venture into the gallery environment, and the changes that have undergone the art form which he first fell in love with as a teenager.

So, how did it all begin?
I was riding my BMX; I was about ten-and-a half. I went into the bottom of this multi-storey car park, just exploring, and heard hip hop music. There was a two-bay car park and there were breakers breaking in the bottom of this car park and it had graffiti all around, and that’s the first time I saw it. Immediately, from then, it just took me. I threw my bike away and started breaking and writing.

I first saw graffiti where I was first born in Kent, then I went to secondary school and that’s where I really started to be obsessed with it. We annihilated the town. As I got older we started using the trains, and doing the inside of the trains was something that was massive to me when I was growing up – doing insides of British Rail’s. It wasn’t like waiting for a tube; you were waiting an hour – half-an-hour if you were lucky – for a train. I spent a lot of my years just doing insides. Then I started to travel and plucked up the courage to come to London and start painting when I was about sixteen. Then eventually I moved to London.

My first spray up was right in the centre of Canterbury. It was about 7p.m. on a Saturday night, right in the middle of town. We were taking it in turns painting and when someone came along you’d have to break dance in the middle of the street on your own – on a busy Saturday night, just randomly break dance! My mate Foxy had the funniest break dancing – legendary funny break dancing. I’d be painting and hear his feet slapping on the floor while he was doing some sort of demented Crazy Legs. I was alright; I was a body-popper so it wasn’t so drastic! It was hilarious. I was only twelve or thirteen. The piece was ‘Zulu’, it was blue and red and it was done with Renault sprays nicked from the local garage.

What were your inspirations at the time? 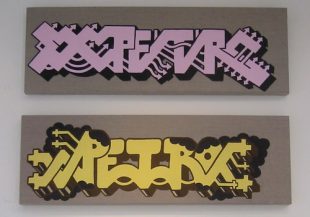 Obviously ‘Subway Art’ had a massive effect on people, but then so did English graffiti and writers from London. They had a massive effect on me. In that time when graffiti was fucking great, in the ’80s, early ’90s, it was so different to what it is now. It was unique, everyone had to be unique, and everyone strived to be really good at it. It was fucking important, and if you were shit at it, you were shit at it, and that was the bottom line.

The most obvious thing is tagging, the way that tags looked in the ’80s and early ’90s; they were just so beautiful. Everything looked so different, and everything was so sculpted. My favourite thing is tagging, and tagging is not as beautiful as it used to be. England used to have some of the nicest handstyles that I’d ever seen.

It’s difficult to find stuff about you.
Yeah, I’ve done one interview and put my photos in one magazine in twenty odd years of painting. I reverted into really childish graffiti in about ’98 – breakdance graff. I got bored with the way graffiti had become such a laboured affair, so I went off on this weird tangent and through that got a lot of love from the people who I would never have imagined would’ve seen my stuff, let alone give it the time of day. A lot of people from around the world knew about my stuff though, which was especially weird because I never put anything out.

What do think of the movement at present, and how do you see it evolving?
The glory days are over, to me. It will always be here, but it’s the nature of it which is changing. Cities are anti-graffiti obviously because it’s such a sign of anarchy and they can’t deal with it. We’ve got the Olympics coming too; notoriously all the cities which have taken on the Olympics in the last few decades have had an almighty clean-up and the whole history of the graffiti has gone. You’re lucky to find a shutter with fifty tags on it dating from the ’80s to now, and they’re doors of history – it’s such a shame. They just buff it… but they’ll stick a Perspex sheet over street art.

Graff’s changed so much; from stealing your paint from DIYs and car shops; having thirty different brands and knowing all of these mad paint companies; and having all these plots and secret places where you go and nick your paint, to having a shop with three brands of spray paint and that’s your only choice. It’s become, over the space of twenty years, a different beast, and it’ll forever change.

You’ve got a show coming up. Do you approach gallery work a lot differently to your graffiti, and do you enjoy it as much?
I’ve been doing stuff outside of letters for a few years; I just haven’t really shown anyone. I’ve been doing this kind of painting for a long time, but this is me starting to show the work and feeling a bit more confident in it. It’s like with graffiti, you start doing something and there are rules: you have to do your time; you have to learn; you have get half-decent before you start going and showing people what you’re doing. I’ve grown up on that ethos so I’ve worked at it and worked at it until I can show people my stuff and see how it’s taken, rather than just running into it. It’s just a natural progression.

There’s a graffiti section, so there’ll be that graffiti fix for graffiti people. The other work is all from graff, all drawn using graffiti utensils and all graff-related, but it’s just a different approach to the same solution. I saw something on telly that said there were twenty-five miles in an HB pencil, so I took on the idea of finding out for myself. I think I misheard though; I was preparing myself for a week, twenty-five miles, and repetitive strain injury – there were only two-and-a-half miles! I’m really into repetition, so I love bricks or fences that go on forever so I’ve tried to do a lot of pattern repetition that’s based on tagging, but out of the tagging comfort zone.

There’s no spray paint involved, though I’ll probably paint some characters during the show. I try to portray fun in my graffiti, and I hope that comes across in the other artwork I do. There’s a whole section on characters, a lot I’ve painted in pieces outdoors. I sometimes teach kids graff which is great, I really like the naivety. My graffiti’s quite naive and that’s what took me into this next section of my career as a writer – just really liking naive graff and the naive line. It’s hard to find that and to open that door in your head; I can see these things but I can’t draw them – I’ve always had that problem.

Now you’re going more public, is your graffiti going to become more accessible too?
I might start becoming a bit friendlier.

King Henry III of France, Louis XVI of France and Napoleon all suffered from ailurophobia--fear of cats.
Joe's