Receiving a Stateside release earlier this year, indie-pop devotees with their finger on the pulse will most likely have already got their ears around the sophomore album from lovable Brooklyn duo, Matt & Kim. 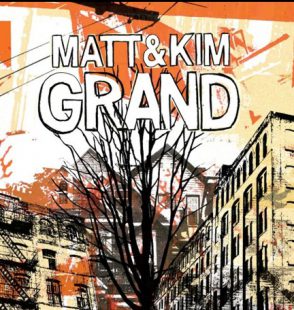 With a string of singles released over here in Ol’ Blighty, not to mention some much talked about videos – namely ‘Lessons Learned’, which features the perpetrators strolling butt-naked through a bustling Times Square – the Matt & Kim free-partying bandwagon continues to roll on with little sign of pulling up any time soon.

With the tried and tested formula – Kim, a bubblegum Meg White, and Matt at the forefront with his infectious piano pop, spiky synths, and gleeful ‘Tom-Verlaine-on-happy-pills’ vocals – the romantically-attached couple have added a little bit of polish and personal insight to the unabashed punk pop that defined their self-titled debut in 2006.

“For our record release show we went with an old factory in Brooklyn where there were 450 people falling into us…it can sometimes make it tough to play, but it is an amazing feeling.” Read the full interview here.

Whereas that LP was recorded in a frenzy akin to their legendary live shows – laid down in a total of just nine days – ‘Grand’ has conversely come together over a period of nine months, largely at Matt’s childhood home in Vermont, New England. No doubt the trigger for the more personalised bent of his lyrics, ‘Grand’ still allows the listener to share in, rather than simply hear of, the experiences of its creators. A compelling insight into the lives of the young creative underclass across the pond; sentiments detailing homemade outfits and their inadequacies, such as on opener ‘Daylight’, have already struck a chord among the duo’s peers from Washington to Wyoming.

With handclaps abound (‘Cutdown’ and ‘Spare Change’), surprisingly anthemic drum rhythms (‘Good Ol’ Fashioned Nightmare’), and sweet synth permeating every track, ‘Grand’ is a guaranteed feel-good record. Cleverly, they’ve also placed one of the album’s highlights, the poignant yet joyful ‘I’ll Take Us Home’ right at the end. With the entire album clocking in at a mere twenty-six minutes, it’s the perfect excuse, if any were needed, to hit that play button and enjoy the journey all over again.

Before Prohibition, Schlitz Brewery owned more property in Chicago than anyone else, except the Catholic church.
Joe's