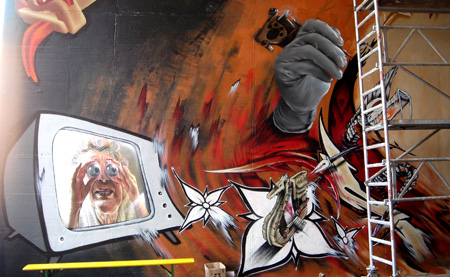 TASSO is a renowned German artist whose phenomenal trompe-l’oeil photorealist graffiti style can be seen all over the world. A master of illusion, TASSO’s lifelike work has been known to stop traffic through the general public’s sheer amazement at his innovative foolery. He was raised in East Germany, whose strict ban on spray cans during the 1980s led TASSO to depart, temporarily, from graffiti and explore new mediums. The results of his experimentation have made him an extraordinary and influential artist.

P: When did you start to paint and who were your first influences?

T: The earliest memory I have of drawing is when I sketched a scene from a book by Wilhelm Busch that I had seen a few days earlier that was stuck in my head. It showed a boy sitting at a table eating soup. From the side, you could see the soup flowing into his hollow body. I must have been 3 or 4 years old. My family was my first influence. Both my parents and grandparents spent an enormous time drawing with me when I was a child. Each of them was able to inspire me in their own way. My mum was able to copy extremely well out of comic books. My dad, on the other hand, would tell me a story to each one of the pictures and then, slowly, he would draw in the figures until, at the end, you could see the entire storyline. I also loved to sit with my grandpa after lunch, asking him for any type of real or unreal figure, which he would, funnily rather than prettily, draw for me. He loved to draw elegant women who wore their hair long or tied up. Somehow this influenced my taste with regards to the opposite sex.

P: A lot of your work is based around illusion. What brought this concept into your paintings?
T: Actually, it all began because of some commission work I did. I was asked to paint windows, balconies with stucco and hundreds of bricks on an empty facade. At that point, I not only realised how much fun it is to fool people with your work, but also really felt the urge to integrate this concept into graffiti. You see, in graffiti a lot of things are rather repetitive even though there is so much possibility.

P: Do you know of any incidents where your work has completely fooled the public?
T: When I finished the aforementioned house, I wanted to show it to my parents. We drove there and parked the car right in front of the building, on the opposite side of the street, and I just looked at them and asked ‘So, what do you think?’ My parents were staring directly at the building and just asked ‘Well, where is the painting?’ At that point I knew it had worked. Another funny story happened in 1999 when I was painting a roof and two roofers on the facade of a house. There was a turning lane leading to a nearby supermarket in front of the building. All day I had watched drivers leaning curiously out of their windows as they looked in disbelief at the one person walking around on top of the scaffold, while the other two were standing there motionless. So, it happened that upcoming traffic was so surprised by the sudden break lights, that it ultimately led to two accidents that day.

P: How has life in Germany influenced your work?
T: First and foremost, I am influenced by small town living. I’ve never really been interested in painting big city life and/or skylines but much preferred to spray paint an elaborate landscape in the tradition of illusionism (trompe l’oeil). In that respect, I don’t think it was Germany that particularly influenced me as I most probably would have done this in any other country as well.
P: Did you ever paint on the Berlin wall?
T: Living in East Germany, we weren’t able to get within 50 metres of the wall. When I finally started to travel, the wall had almost been removed.

P: Did its removal have any impact on artists like yourself?
T: For me, the wall symbolised the lack of freedom we encountered in East Germany. On this side of the wall, nothing better expressed the restrictions we experienced with regards to free travel and/or freedom of opinion and speech. Thus, the wall always seemed rather frightening and repulsive; not at all creatively inspiring during my Berlin travels prior to 1999. What meant a special place with long, endless free white walls to West Berlin writers, meant for us people in the East nothing more than: Stop, no more – that’s where all the fun stops! Any further step could cost you your life.

P: Describe your strangest commission and are there limits to what you are willing to do, since it seems you can do anything? 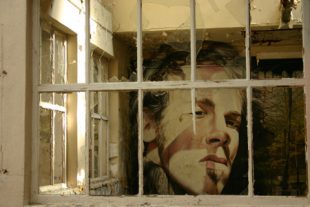 T: Some tastes I would definitely call strange. There are cases when you suggest something really cool to the people commissioning you, but they are totally stuck on traditions. Or sometimes, people ask you to paint mountain scenery including little angels and if possible, a picture of the pope inside a very small kitchen. Luckily, this didn’t meet the taste of the landlord either and so it was left out. I love to overcome limits and barriers, but once there was a guy who asked for something that came pretty close to child pornography – to that I said no. Also, when it comes to political issues, I would always try to ensure that it is in alignment with my conscience and beliefs.

P: Tell us about the ‘Freddy Kruger’ train.
T: I was carrying this idea inside my head for a few years, knowing though that it would only be realisable if done legally. Hence, I planned doing this at a trasher which was made available for painting in a town nearby. As I didn’t want to paint the whole space by myself, I invited a friend of mine, KIOSK, to join me as I knew he would be flexible enough and like to do something like that. Unfortunately, I couldn’t get my colleagues from Ma`Claim to join me in this project. First of all, we painted the entire thing so it came closer to its original look. The idea was to use Freddy Krüger to symbolize the nightmare of those who were destroying the train night by night. That’s why we used long knife slashes cutting across the entire area.

P: Do you paint trains often?
T: I don’t use trains too often as a theme within my pictures. I just don’t really relate to it. I shouldn’t really talk about my activities in this area. All I can say is that due to my late entry age into graffiti and my untrained body, I realised rather quickly that I am not up to a chase with the much younger and better trained policemen. But in working together with my crew Ma`Claim, trains became more important. I met many active, creative and brave bombers and by using their favourite object, tried to show my respect for them.

P: Are the German police fans of your work?
T: Ah, you know cops are just people too. And, luckily, people have different tastes. Honestly, I don’t really care if someone looks at what I do and calls it art or not. There are as many pretenders as there are people who criticize what I do because they really hate the illegal aspects of graffiti. I often still find my pictures very boring. They are technically well-developed but sometimes seem without content. I guess, this pretty much reflects our Zeitgeist, which can be characterised by emptiness on the one hand, while often trying to shock on the other hand. I find it unfortunate that graffiti is not often enough used to reach a larger audience with a statement or with regards to certain issues. I’ve already realised that you can reach the mass media through the content of your work. In February, I worked with colleagues on a wall which I dedicated to the two kidnapped Germans in Iraq. I was really affected by the sensation-mongering that existed and the following, sudden disinterest of the people. There are people in captivity who don’t know if they will survive the next day, but a story is only good for the headline at the beginning. As soon as a new superstar is chosen, important issues like this are forgotten. I am what I do!

P: If you had a million euros what would you buy?
T: I would buy myself the freedom to paint only the pictures inside my head instead of spending a lot of important and otherwise useful time on things that sell well.

P: If you could be an animal for ten minutes what would it be and what would you do?
T: I would like to be an eagle so I could rise in the air using my own body strength. I could view the world from above, could feel the air and my MP3 player would play Eagle from ABBA.

P: What did you do just before this interview?
T: I just came back from playing squash which, not being a sporty person at all, I’ve really started to love since I started in January (my body is moving much faster than my mind towards the big 40), and now I’m eating two slices of crisp bread.

P: What music do you like?
T: Punk, heavy metal, grunge, rock`n`roll, oldies, new wave, disco, volksmusik, these days also jazz…You’d be better asking me what I don’t like!

P: What is the biggest piece you have ever worked on?
T: I think the www.ta55o.de/aus_zwg.html was the biggest (with regards to dimension) solo project I have worked on. Collaborating with various people, I was lucky to participate at the then largest graffiti wall ‘The Gods of Rügen’ a few years ago. The dimensions of this wall have been topped multiple times since then though.

P: Other than art, what consumes your time on a day-to-day basis?
T: Women in the past, these days one woman! My family (my grandfather is 86 and I’m trying to visit him at least once a week) and a few friends outside the graffiti scene. There is graffiti, commissions, exhibitions, the preparation of such from idea, to concept and realisation, taking photos, drawing sketches, travel plans, making and maintaining contacts, visiting people and having people visit, Ma`Claim. …there isn’t much time left for anything other than art.