If your list of greatest ever hip hop records includes albums such as: The Ultramagnetic MC’s ‘Critical Beatdown’; ‘The Great Adventures of Slick Rick’; Eric B. & Rakim’s, ‘Paid In Full’; Stetsasonic’s ‘In Full Gear’ or the Beastie Boys’ ‘Paul’s Boutique’, then it is safe to assume you have probably subjected someone to your ‘hip hop ain’t what it used to be’ speech, at one time or another. The main problem with said rant (and you know you have done it) is that you always end up sounding bitter. Maybe it is true. But there is one thing everyone learns one way or another and that is that history always repeats itself. 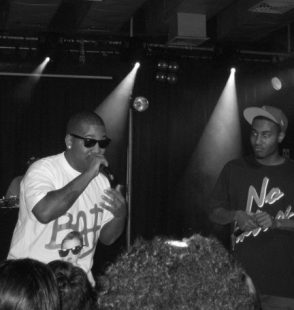 Chuck and Mikey are two young MCs from Chicago (who rather aptly go by the name The Cool Kids), and they are on a mission to bring the old school boom-bap back. Clever, quick-witted lyrics filled with golden-era bravado are laced over cavernous, stripped-back electro beats and sparse synth bass lines.

Then there are the clothes: fat gold chains, Cazal sunglasses and box-fresh Air Jordans. It’s like 1988 all over again and we love it. As far as comparisons go, the opening line of their track, ‘One Two’: “What it is, what it is, come check the noise, it’s the new black version of the Beastie Boys” is not a bad place to start. As Mickey avows, “I am definitely a big fan. They loved rocking shows and did it well…I think that we share the same attitude to a lot of stuff. They were not scared to be themselves despite what everyone else was doing around that time. They just didn’t care.” Chuck agrees: “They were not trying to play it safe. They have two Grammys in two genres, which is amazing. They just didn’t care and most of the time we just don’t give a fuck.”

Despite obvious allusions to a late ’80s and early ’90s sound, the pair deny deliberately mining a retro vein simply for the sake of it. “We do what sounds ill to us. We try to stay unconscious of that stuff. We don’t ‘try’ to do anything. Music is better that way. I just want it to sound good,” explains Chuck. “We make what we like. We make songs that are relevant to us. I get my inspiration from almost anything…whether it is something I see outside, a place I want to go, a movie or a video game,” says Mikey. “Ditto, I just want people to say ‘Wow, that shit sounds dope,'” offers Chuck. Believe it or not, their influences are pulled from all over the musical map. “I want to remix a Police song real bad,” admits Chuck, “probably ‘Walking on the Moon’. If anyone has that a cappella, holler.”

Old-school rhetoric aside, The Cool Kids embody the here and now. Trading in choice cuts of today’s pop culture ephemera: sneakers, fashion, video games, internet culture, The Cool Kids manage to pay homage to great hip hop of the past without ever sounding tired. ‘The Bake Sale’—their self-produced debut album—has, due to unforeseen circumstances (a fan base which far exceeds what they first thought), had its release date temporarily pushed back in order to secure distribution capable of satisfying demand for the record. Not bad for two guys who were still in school six months ago. “Expect it to be dope,” promises Mikey.

If pedigree is still a question for any naysayers, then one only need look at the company the pair keep. A recent invitation to open for Pharoahe Monch in New York should be enough to quell any doubts, but there is also the fact that The Cool Kids will be releasing their music through A-Trak’s newly-formed Fools Gold label. With credentials like this, even the most cynical of hip hop purists should be forced to give these guys a deserving listen.

As of 2002, China had over 100 million manufacturing workers compared to about 17 million in the US, 12 million in Japan, 8.5 million in Germany and 2.3 million in Canada.
Joe's